Home » About Us » Staff » Jay Sharman

Jay believes that status quos are meant to be broken.

In 2000, he co-founded TeamWorks Media, predicated on the notion that purpose-driven organizations have the power to change both the world and their bottom lines through a well-told story. As technology evolved, Jay saw a marketplace need for both large-scale, emotionally engaging content and the ability to help clients get that work in front of the right people at the right time in the right place.

Jay is a leader in digital media property creation and creating content-driven solutions to change the trajectory of a client’s business. He is a regular on the content marketing speaking circuit including recent speeches at American Marketing Association (AMA) Non-Profit Summit, AMA Higher Ed Summit, Portada Sports Marketing Summit and Vistage (Worldwide Peer CEO Network) to name a few.

Jay has had the privilege of working with a wide range of clients at TeamWorks Media, including significant partnerships with ESPN, the Big Ten Conference, MLB, Comcast, Converse, Gatorade, Northwestern University, National Baseball Hall of Fame, Procter & Gamble and more.

He started his career as a sports television producer for Fox Sports Net and won an Emmy for his work covering the Michael Jordan-era Chicago Bulls. A Rhode Island native, Jay lives in Lake Bluff with his wife Tanya and their three girls.

A passionate writer and sports junkie (basketball, running, tennis), Jay created Lake The Posts, a Northwestern athletics blog, where he wrote nearly 4,000 blog posts over seven years on the train to and from work. His wife reminds him Scott Turrow had a much better ROI on the same train. 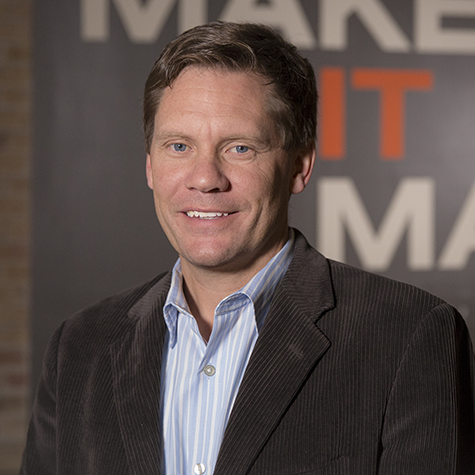